The Department of Migrant Workers Secretary Susan “Toots” V. Ople announced the appointment of key DMW officers and have described this new team as a mix of seasoned government officials and new faces who share a commitment to serve Overseas Filipino Workers (OFWs).

Also Read: Why Many Filipinos Want to Become OFWs and Work Abroad

The Department of Migrant Workers is a government agency tasked to protect the rights and promote the welfare of Filipino migrant workers. This was created recently in order to address the unique problems and challenges that our migrant workers face. This is also put up with the aim to unify all existing government agencies in the Philippines to have an OFW department dedicated to serving them. 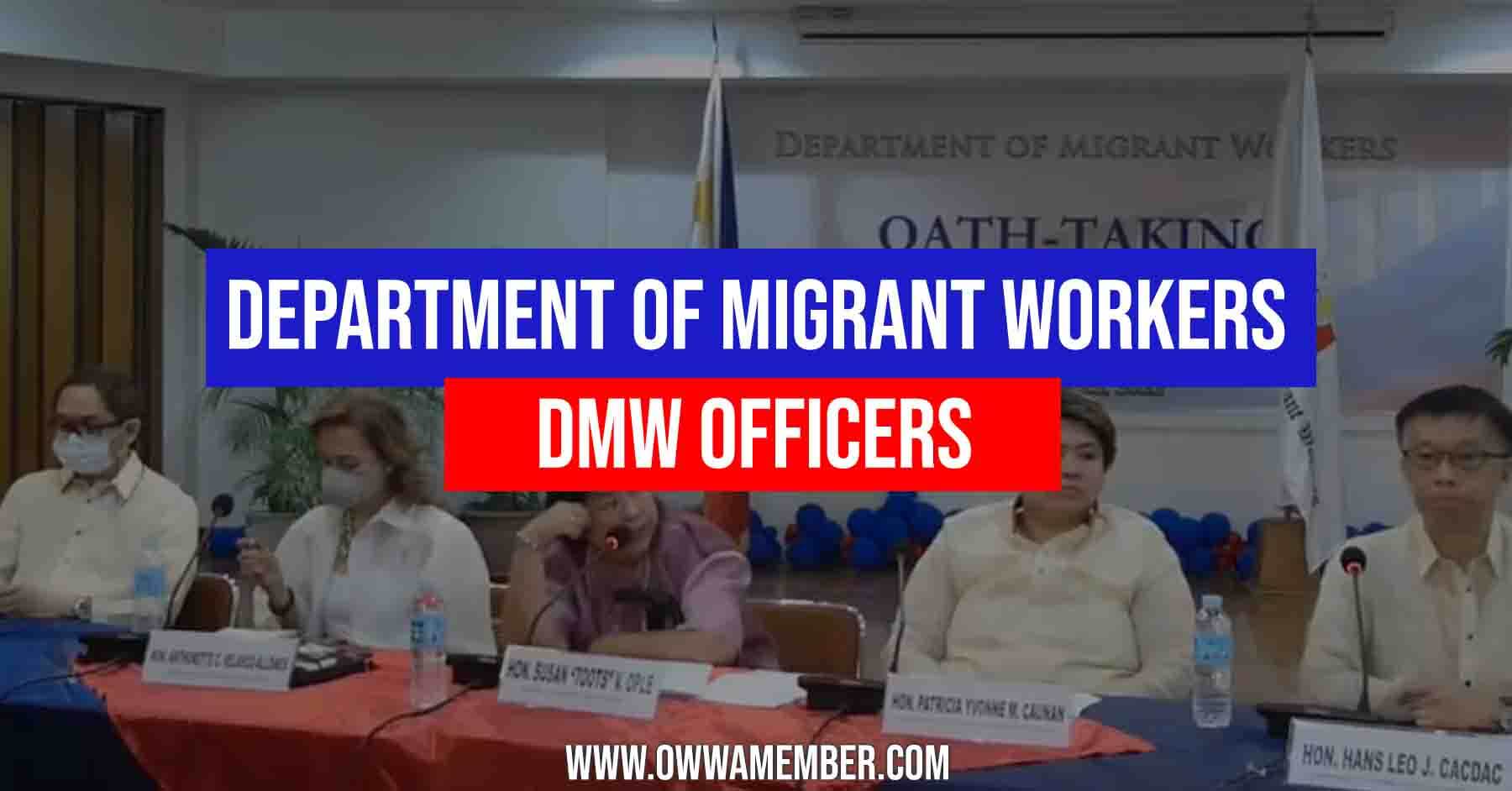 Appointed Officials of the Department of Migrant Workers

The newly appointed officers of the Department of Migrant Workers are as follows:

Other key appointments include: 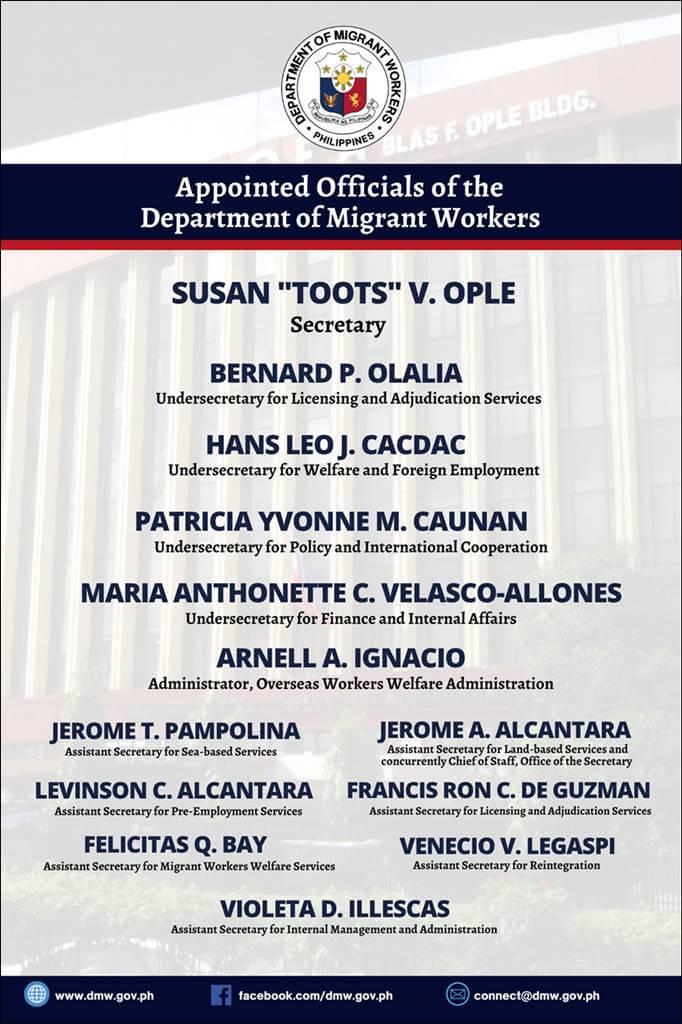 The officials of the Department of Migrant Workers (DMW) include experienced people like Atty. Bernard P. Olalia and Atty. Hans Leo J. Cacdac. Both of them have a lot of experience working in the government, with Atty. Olalia having worked in the Philippine Overseas Employment Administration (POEA) and Atty. Cacdac having worked in the Overseas Workers Welfare Administration (OWWA).

A new Undersecretary for Licensing and Adjudication Services in the Department of Migrant Workers has been appointed. Olalia will serve as Officer-in-Charge (OIC) of the POEA until the DMW is considered fully formed following approval of its 2023 budget. Olalia has worked for DoLE and the POEA for more than five years.

Cacdac, who has worked for the Department of Labor and Employment (DoLE) and OWWA for 21 years, will take over as Undersecretary for Welfare and Foreign Employment. He’ll be in charge of the Aksyon Fund, a fund that will be used to aid distressed OFWs from many nations.

Ms. Maria Anthonette Velasco-Allones is a very experienced civil servant. She has worked for 31 years in the government, and she has a lot of experience working with the Department of Labor and Employment (DoLE). She was also an Assistant Secretary under the previous administration. Right now, she is an Undersecretary for Finance and Internal Affairs in the DMW.

Attorney Patricia Yvonne M. Caunan, a recent addition to the government service, was the head of a highly successful law firm that specialized in labor, civil, administrative, and criminal matters. She has been an advocate for the rights of migrant workers, providing free legal assistance and advice in a variety of settings. She will join the government as DMW Undersecretary for Policy and International Cooperation.

Atty. Patricia Yvonne M. Caunan is a new government employee who was a successful lawyer. She defended workers’ rights and gave free legal help to people in many different situations. She is now working for the government as the DMW Undersecretary for Policy and International Cooperation.

Before Arnell Ignacio became the OWWA’s head, he worked as Deputy Administrator of the OWWA. He took on this position in September 2021. He served as an administrator with OWWA for a year before leaving for personal reasons. Administrator Ignacio knows about the difficulties faced by migrant laborers because he has been one himself for many years.

Also, one of the new people working at DMW is Venecio Legaspi. He used to be an OFW for 29 years in Saudi Arabia. He is now the Assistant Secretary for Reintegration. Venecio worked his way up from the bottom to become vice-president of a bank in Saudi Arabia before he retired and joined DMW.

As you can see, the DMW is made up of people who have a lot of experience with different aspects of migrant workers’ lives. They are committed to helping migrant workers in any way possible. You can contact the DMW if you need help or have any questions about migrant worker issues.

Here’s a video showcasing the oath-taking ceremony with the newly appointed Department of Migrant Workers officers.

The DMW team’s mission is to defend and protect Filipino migrants’ rights. This is fantastic news for all the Filipinos working abroad, as this new DMW department will be looking out for their best interests.

The Department of Migrant Workers’ announcement of its new appointed officials features a highly qualified and experienced lineup. These individuals bring with them a wealth of knowledge and experience that will be invaluable to the department in its mission to protect and advocate for migrant workers both here in the Philippines and abroad. We wish them all the best in their new roles!

The different programs and projects initiated by the Department of Education (DepEd) aim to improve the quality of education in the country. The provision...
Read more
News

All Overseas Filipino Workers (OFWs) in Sweden should be aware of how to acquire an Overseas Employment Certificate (OEC). The OFWs' employment contracts will...
Read more